TENTORIUM ® products for those wishing to give up smoking 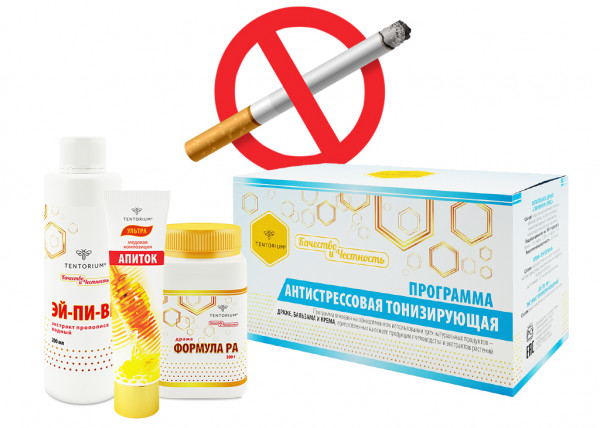 TENTORIUM ® products for those wishing to give up smoking

Every third Thursday of November society celebrates the International smoking cessation day. The history of this bad habit goes back to the remote past: Maya Indians already smoked tobacco. To Europe tobacco was brought in the middle of XVI century as a gift to a French queen Catherine Medici. Quickly becoming addicted to a novelty, the queen ordered to start its cultivation. In Russia the tobacco history was different. Though it was brought there at about the same time as to Europe, during the reign of Ivan the Terrible, it was called not otherwise than “tobacco potion” and those smoking it were given a flogging.

Currently in the world, according to the statistics, about six million people die annually from smoking – every tenth person from the world’s dying population, while one percent dies from passive smoking.

Since recently more and more young people have been choosing a healthy lifestyle while longstanding smokers are more often prone to give up the habit. The ways to do it are multiple varying from personal will power to medicines and alternative medicine. Among the first steps to overcome tobacco addiction psychologists mention gradual decrease in the number of smoked cigarettes per day and widened time slots between smoke breaks.

Very often smoking is caused by stress, therefore it is recommended to start cessation from Anti-stress program course intake which is composed of “Tentorium Plus” dragee, “A-P-V” balm and relaxing nervous tension cream “Tentorium”. All these products are aimed to protect body from emotional and physical overstrain and its consequences and they are right for those under constant stress. Apart from nicotine, cigarette contains a whole range of dangerous components. One of them is carbonic oxide. It replaces oxygen in erythrocytes forcing our heart to work with double intensity. Honey composition containing concentrated propolis extract – “Apitok” – is excellent in fighting these negative consequences and filling oxygen deficiency.

Among other cigarette components: formaldehyde, benzol, resins which prevent proper lungs’ clearance. Filter tips are not a rescue here. They retain just one fifth part of nicotine and let pass almost completely all other components, for example, 90 % of contained arsenic. That is why during the smoking cessation period it is recommended to include “Formula RA” dragee in a daily ration. Due to beneficial interaction of pollen and wax moth extract contained in the dragee it contributes to lungs’ clearance and regeneration. Propolis extract “A-P-V” has general strengthening and immune stimulating effects, it freshens oral cavity while being an excellent antiseptic.

It often seems that physical and psychological tobacco addiction is very strong, and it is not easy to give up smoking. But if you are truly determined to say “No” to cigarette, just do it with TENTORIUM® products – effective assistants in fighting this bad habit!